Some of them seem to be scary, some of them are funny, however all of these advertisements are creative and impressive.

Original ads from “Telefonica” – combining two nationalities and their most significant traits, embodied in one person – to depict the lowest call rates to Japan and Scotland.

The next on the list is the brand “Zippo” and its lighter’s advertisement, showing that the product is highly sustainable

“Olsen Vodka Bar Madrid” demonstrates that you can use vodka in many different ways:

3M put 3 million dollars behind their bulletproof Security Glass right on the bus stop, to ensure the costumer that this product is reliable enough:

Stop’n’Grow made very creative advertising bags for nail polish, which helps to break the bad habit to bite nails:

Hewlett-Packard Company claims that you have to find the better use for your old printer, because it definitely can’t compete with new HP products:

Denver Water Company proposes to save water comparing the amount of the water you really need with the place you fill on a bench:

Watch Around Water public awareness raising program horribly realistically depicting what could happen if you loose the oversight of your child in public places such as swimming pools:

Samsung appealing to costumers not to hide their real musical tastes with a popular hard rock sign made with mobile phones of the brand:

World Wildlife Fund demonstrating with this box for paper what’s going on with the rainforests while people are wasting paper and underlining what does this means for the whole planet:

Greenpeace made some handbags to pay more attention for animals, which need more help from the people:

HALLS claims their candies have so strong flavor that you can use it instead of steam inhalation:

Porsche showing leaves stuck in the tree and one can suggest it’s because of the high speed car rushed seconds before which caused this:

Dettol antiseptic placed all daily actions made by one’s hands in the form of a hand to warn how many microbes and dirt on these surfaces are waiting for you:

Sharpie ensures you that their pens are so sharp and precise that you can even draw a fingerprint with it! 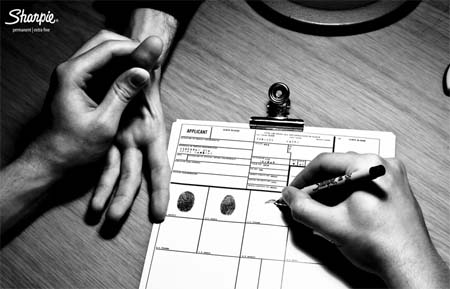 Radiant Gym promotes healthy lifestyle and sports saying that “obesity finds it hardest to catch up with those who are running”:

And this is how the The Father Bob Maguire Foundation charity campaign look like – the bins for garbage designed as dining table with a plate and the touching slogan: “For the homeless every day is a struggle”.

Wonderbra creates a parallel between the yellow safety line in the underground and bras that can offer women safety as well:

AXE shows the way to escape in the form of the common EXIT symbol from the crowd of women, who can’t resist the power of the AXE antiperspirant:

IBUPROFEN demonstrates the feeling of the terrible headache in their ads, making a promise it would save you from it with a slogan: “More powerful than pain”

The social campaign against domestic abuse with a phone designed as a man’s fist punching a boy:

The ads of the STABILO markers demonstrating its long lasting power:

Great ads of the hair brush from Rejoice with a giant brush combing wires:

Yoga center presents what they can teach you how to do the same with your body: 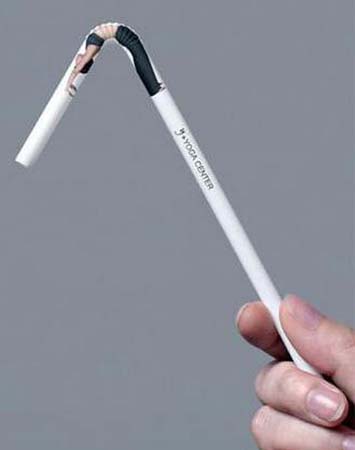 Cingular Wireless Services claims you will drop the fewest dropped calls showing how does it feels when you dropping the call in a huge installation:

FHM men’s magazine speaks for itself placing such an advertisement on a car:

Fitness Company ads in the public transport that look like a bar-bell giving you the chance to feel like you’re working out in a gym:

The cleanest stripe of the zebra-stripe crosswalk with Mr. Proper on it:

The face of the man, where his mouth is an exhaust stack of the bus calling you to give up smoking: 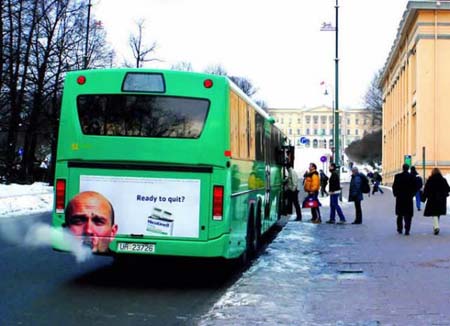 The Silberman’s Fitness Center logo on a billboard with a man, who definitely needs to go to the fitness center as he’s so fat that he made that billboard falling to the side of this man:

Dr. Best toothbrush flexibility as the part of the huge bus:

A couple kissing as the doors close in a bus because of SMINT candies. So they guarantee you a kiss:

Radio controlled bottle of beer? You just have to wish and the Heineken will embody it, as this bottle of beer with the bus wheels

Tiernitos made an ads where the dogs got insane because of their special dog food and just rushed forward together:

The bus designed as the house full of girls, which you can enter easily just using AXE Effect antiperspirant:

Another funny ads depicted on a bus from PEPSI. Looks like the bus is full of PEPSI and people inside are drifting in it:

DURACELL ads placed on a bus as if the bus was working from Duracell batteries:

National Geographic Channel painted the doors of the bus as the shark’s claws, which looks scary, but creative:

Handhold as watches from The Big Pilot’s Watch to try how it looks on your hand it right there: 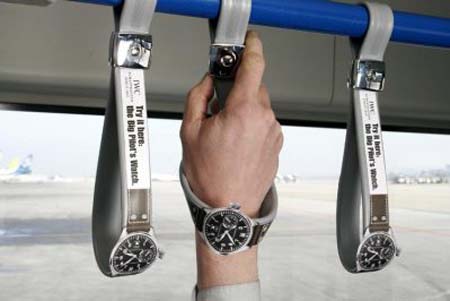 Hold a can of BALTICA Dry holding the handrail in the bus: 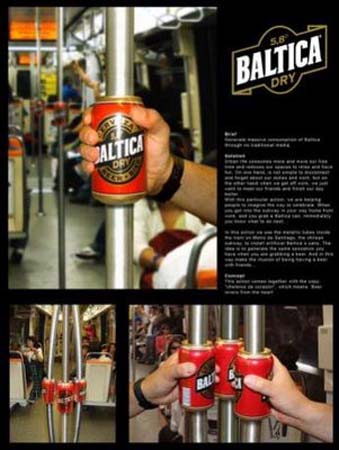 Blumarea Diving School alludes they can even make your cat enjoy diving:

Eukanuba dog food is so tasty that your cat would behave like a dog just to get this food:

Sprite Ice Blue is so refreshing, that maybe it’s too much:

Fitness Company produced handbags with the pictures of hand weight:

Social campaign against obesity with a picture of man accomplishing a suicide with a “rope” made of sausages:

Hi Fi Klubben company propose you to change your stereo when your favorite music sounds not like it has to:

Scholl Shoe spray fights foot odour, even if it so strong that could cause the parrot’s death: 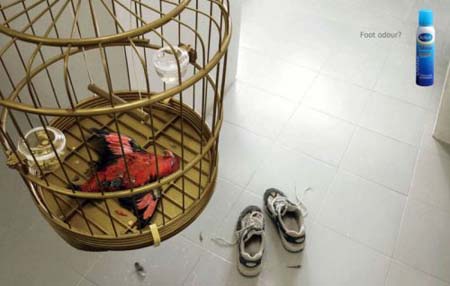 Chili sauce “Chillivilli” from Sil is so hot and spicy that can burn your shirt:

That MINI Cooper from British Motor Corporation is so compact that you need to sit on the ground to catch it:

Strong Iced Coffee will help you to avoid ridiculous situations because of occasional sleep:

If the water is too rough, the Relpipe PP-R pipes guarantee you it would be less iron in the water falling from your shower:

We are enjoying the last months of summer while media giants are working to improve users’ experience, help brands get more exposure, and sell as many goods as possible. These END_OF_DOCUMENT_TOKEN_TO_BE_REPLACED

Summer is in full swing but social media giants are working to improve users’ experience, help brands build their presence, and ease marketers’ life. Here is the most useful Social END_OF_DOCUMENT_TOKEN_TO_BE_REPLACED

There are a lot of myths about working schedules in different countries. In some countries, employees are considered to be more hardworking, than people in other countries, while others even END_OF_DOCUMENT_TOKEN_TO_BE_REPLACED